Pain can stop us dead in our tracks and throw life off course, affecting both our physical and mental health.

A pretty common response is to reach for the painkillers, but there’s another, more natural treatment you could consider?

We’ve done our scientific research and created a compilation of the seven best teas for pain relief out there:

No doubt you already have turmeric in your spice rack but you probably didn’t know it’s great for alleviating pain.

The rheumatology community swears by it as an effective pain relief option.

Don’t think it’s just hearsay either. Turmeric is one of the very few plant products that has been studied in multiple clinical trials.

There’s an active ingredient within it called ‘curcumin’, which has been proven in a meta-analysis published in the Journal of Medicinal Food to be effective when it comes to relieving joint arthritis pain.

Approximately 1000mg per day of curcumin can do wonders for those suffering.

Turmeric isn’t just for people with a health condition either. Even the most active and healthy people can experience discomfort, as keeping fit can lead to muscle soreness and exercise-induced inflammation.

Good news! Turmeric has been scientifically proven to assist with recovery and enhance our performance.

There’s nothing worse than stomach bloating. It’s so uncomfortable, painful and is normally caused by the body reacting to something we have ingested. In the abdominal area it can range from mild to severe.

Thankfully peppermint tea can come to the rescue!

In her book Beat Your Bloat, nutritionist Maeve Madden explains that mint contains a compound called menthol that helps with intestinal contractions and the associated pain.

For any of our readers suffering from Irritable Bowel Syndrome (IBS) you’re going to want to pay closer attention right now:

The perfect home remedy for anyone suffering with Irritable Bowel Syndrome. The natural oils found in mint help to break down and remove gas from the digestive tract.

Her claims have been supported in another study by researchers from the University’s Nerve-Gut Research Laboratory.

They discovered compounds in peppermint can activate an anti-pain channel in the colon which can soothe inflammatory pain in the gastrointestinal tract.

This channel is called ‘TRPM8’ and may actually reduce the discomfort linked to eating some spicy foods.

Another great herbal tea for pain and body aches is ginger.

Researchers from Georgia College and State University and the University of Georgia discovered that ginger can actually quash pain.

Their study, shared in the Journal of Pain, blinded the scientists and participants, as it proved that ginger could ease the muscle pain we experience when we play sport or do gardening.

Research focused on the effect of ginger capsules and heat-treated ginger compared to ‘dummy’ capsules.

Participants were asked to take part for 11 days. During this time they carried out strenuous arm exercises and rated their muscle pain over three consecutive days.

The ginger capsule taking group rated their pain lower than the placebo group.

With ginger’s pain relieving effects you’re going to be thirsty for this post-workout tea!

Lavender doesn’t only smell wonderful but it’s brilliant when it comes to tackling anxiety.

And when we look at its impact on pain, we realise this tea has more anti-inflammatory properties than you probably realise.

Studies have shown it can reduce inflammation and stop other serious conditions that can leave you suffering in pain.

Through reducing inflammation you decrease the risk of blood clots that are caused by inflamed arteries that can lead to heart attacks.

It also has the ability to limit pain by reducing inflammation of the muscles and joints, and minimizing spasms.

The perfect tea if you want to be placed into a calm state and reduce pain at the same time.

The main active ingredient is ‘salicin’ which is a chemical very similiar to the over-the-counter pain reliever, aspirin.

In fact, if you trawl back through the history books, you will learn that in the 19th century, salicin was actually used to develop aspirin.

Due to willow bark’s anti-inflammatory properties, it’s also believed to be powerful when it comes to combating joint pain.

In a community trial, comprising of 100 men and women with a history of joint pain, participants were given either a joint pain supplement containing white willow bark extract or a placebo.

The results showed a significant improvement for those who took the supplement, minimizing joint pain and making daily activities for those with knee pain a whole lot easier.

If you’re suffering from arthritis, this one is going to spark your interest:

Within green tea you’ll find a rich source of ‘polyphenols’, essentially micronutrients, that contain anti-inflammatory properties according to the Arthritis Foundation.

You’re going to want to pay attention to the science part:

And, that’s not the only important piece of research that’s going to make you reach for a cup:

University and medical researchers in China published their findings on EGCG in the BioMed Research International publication, and discovered it can shut down chronic inflammation.

The perfect herbal tea for those in agony with pain.

Rooibos tea is also known as ‘red tea’ or ‘red bush tea’, and is grown on the western coast of South Africa (it tastes delicious!).

More importantly for you, rooibos has many antioxidant and anti-inflammatory properties to help ease any aches or pains you may have.

To be more precise, there are actually several different types of antioxidants including quercetin, which has been found to have a number of anti-inflammatory properties.

If you’re prone to stomach pain this one may be a great aid for you too.

The South African Rooibos Council also recommends the tea as a remedy for colic and stomach cramps.

Pain sometimes leads to disrupted sleep. If you’re someone failing to get decent night’s rest, take a look at our list of the the best teas to help you sleep better.

Share
Previous 29 Chronic Pain Statistics: Facts, Figures And Research
Next Discover The Best Back Massager for Pain Relief in 2021

18 Benefits (and 3 Risks!) of Visiting a Chiropractor 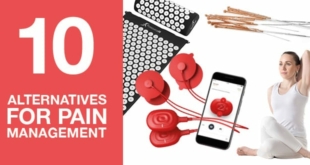