The 8 Best Teas to Help You Sleep Better (Tonight)

For over 4,000 years tea has been brewed all over the world. But did you know that it’s actually the second most popular drink after water and on any given day, with over 159 million Americans drinking it.

The type we are most interested, and love, is herbal! ‘Why?’ we hear you ask.

Well, it’s been scientifically proven to reduce anxiety and consequently, it will help us to achieve that good quality slumber we all so deserve.

Here are our top eight teas, all backed-up with research, that will improve your sleep:

There’s a stack of anecdotal evidence that indicates chamomile is a safe and highly effective natural sleep aid.

But that’s not all, it’s also regarded as a powerful herb used to treat a wide range of conditions – from skin disorders to heart diseases.

The Molecular Medicine Reports revealed chamomile’s curative and preventative properties especially when it comes to inflammation and reducing physical pain.

When we’re not feeling great, we’re more likely to toss and turn.

Chamomile has also been proven to be an important ingredient for better quality sleep.

In a trial involving cardiovascular patients, 10 out of 12 patients fell into a deep sleep for 90 minutes after drinking a cup of chamomile tea.

The chances of insomnia increase with age but do not fear, chamomile can help with this.

One study carried out in a nursing home explored just how effective it can be when it comes to getting shut-eye. Over 28 consecutive days, 60 nursing home residents took part in a sleep experiment.

Some participants were given a dose of 200mg of chamomile extract twice a day and they had a significantly better night’s sleep in terms of quality, in comparison to those who didn’t receive any.

The optimal time to enjoy a cup of chamomile tea would be: just before bedtime. We recommend at least 30 minutes before you hit the duvet. 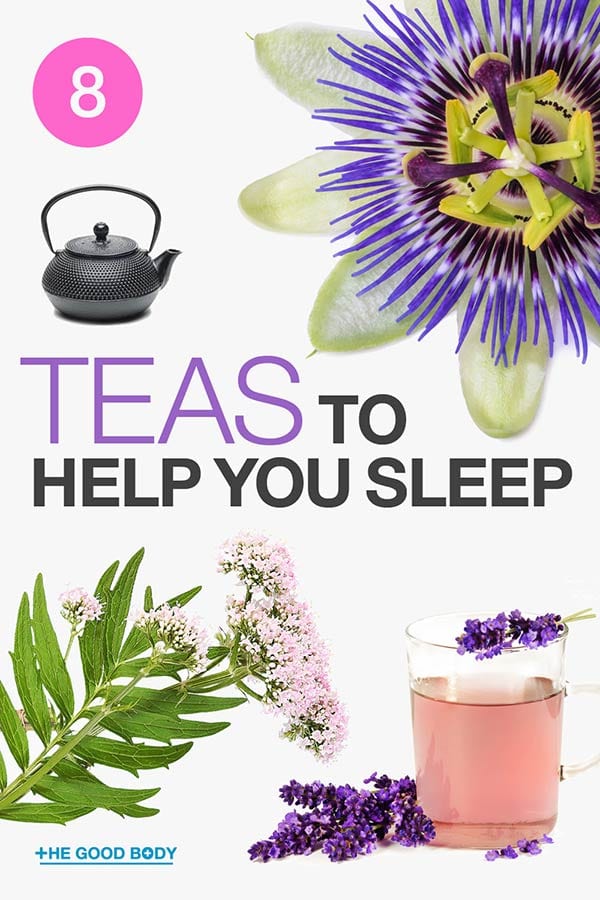 Don’t forget to pin these teas to help you sleep for later!

Green tea technically covers a wide range of beverages – from sencha to jasmine to oolong.

Dr William Lu, world-renowned doctor and scientist in Eat to Beat Disease: The New Science of How Your Body Can Heal Itself, describes green tea as an amazing health booster jam-packed with benefits. 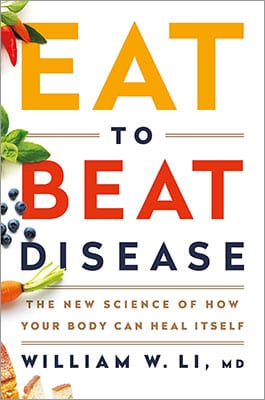 This is because the major active compound in green tea is Epigallocatechin Gallate (EGCG).

If that wasn’t enough to get you hooked on green tea, then it makes a fantastic sleep inducer.

It contains the amino acid theanine which has been proven to reduce stress-related hormones and neuron excitement in your brain, helping you to relax and then drift off.

A study from Japan indicates that drinking 3-4 cups of low-caffeinated green tea during the day may reduce fatigue and stress, as well as enhancing your sleep quality.

There’s one important thing to remember about green tea, whether it’s decaffeinated or low-caffeinated, it still contains caffeine!

Before bedtime you need to create a caffeine-free zone as it will play havoc with your sleep.

Even consuming caffeine as long as six hours before going to bed can reduce total sleep time of one hour.

The optimal time to enjoy a cup of green tea would be: before midday now we know all about caffeine.

Shawn Stevenson, nutritionist and best-selling author known for Sleep Smarter: 21 Essential Strategies to Sleep Your Way to a Better Body, Better Health, and Bigger Success states that valerian is a ‘moderate sedative’. 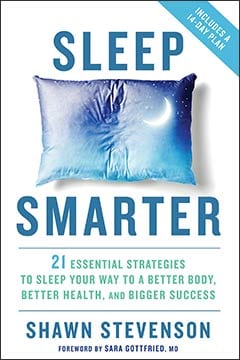 Valerian tea is made from the root or leaves of the plant. It’s perfect for people who struggle falling asleep and it will also help you to experience the uninterrupted sleep we all crave.

What is there not to love about valerian?!

Pour one cup of boiling water over one teaspoon (two to three grams) of dried root and steep for 5 to 10 minutes.

The optimal time to enjoy a cup of valerian tea would be: between 30 minutes to 2 hours before bedtime.

If you’re looking for a calm and restful night’s sleep, you’re definitely going to want to invest in this one.

It has been associated with relaxation, enhanced moods, pain relief and better sleep quality.

Studies indicate that passionflower increases gamma-aminobutyric acid (GABA) in the brain. GABA is a naturally occurring amino acid that blocks impulses between nerve cells in the brain.

Researchers suspect that GABA may make you feel happier and have a calming, relaxing effect on the nervous system which in turn can help you fall asleep.

A study by the School of Psychology and Psychiatry, Monash University (one of Australia’s leading universities) shows that passionflower has many positive benefits on sleep quality.

Forty-one people aged between 18-35 years were asked to either drink one cup of passionflower tea or a placebo over the course of a week.

Everyone maintained a sleep diary and 10 participants took part in an overnight polysomnography (also commonly referred to as a PSG) – this is essentially a test that is used to diagnose sleep disorders.

After careful analysis, those who consumed the passionflower slept considerably better.

The optimal time to enjoy a cup of passionflower would be: an hour or so before bed.

For anyone suffering from insomnia, this is a must-have item. It’s one of the best choice of drinks before bedtime because it’s naturally caffeine-free.

Also there are compounds in the tea that help to relax your muscles which will leave you feeling calm.

In addition, it’s been shown to reduce indigestion that could potentially leave you laying awake and uncomfortable.

If you’re feeling nauseous or suffering from morning sickness, you need to make peppermint tea your go-to drink in order to get some decent sleep.

The Journal of Natural Science shared a study that examined the effect of peppermint oil on 101 pregnant women who suffered from both of these ailments.

The optimal time to enjoy a cup of peppermint tea would be: any time of the day!

You can have it post-meal to help ease indigestion, in the afternoon as a re-energizer or just before bed as a relaxer.

It’s not as common as the others but that doesn’t mean it’s not as good.

We’ve got some facts for you!

Even though it has a lovely sharp lemony smell, it is actually part of the mint family?

According to the British Herbal Medicine Association, lemon balm usage dates back to the Middle Ages?

Over the years, and even still today, it’s a ‘go-to’ herb to improve appetite, ease digestive problems, reduce stress and to treat insomnia.

One behavioral trial published in The Mediterranean Journal of Nutrition and Metabolism showed a 42% reduction in insomnia symptoms after participants took 600mg of lemon balm extract every day for 15 days.

Research indicates that lemon balm triggers our friends mentioned above, the GABA receptors – key players when it comes to shut-eye!

The optimal time to enjoy a cup of lemon balm tea would be: after your evening meal as it also helps with digestion.

This is the national drink of Fiji and is actually commonly used to help with sleep issues, including insomnia.

In one study, 24 patients suffering from stress-induced insomnia were treated for 6 weeks with a daily dosage of 120mg of kava.

It was found to reduce stress and insomnia for everyone that took it.

Although, there was some skepticism about this study as participants were told whether they had received kava or a placebo, so potentially results could have been skewed.

In a clinical trial involving 61 participants over the course of four weeks, participants either received a daily dose of 200mg of kava or a placebo.

The people that received kava reported a reduction in anxiety and better sleep quality.

The optimal time to enjoy a cup of Kava Kava tea would be: an hour before bedtime to help you unwind.

Lavender, also referred to as ‘Lavandula angustifolia’, is frequently used in essential oils because it’s widely known for placing you into a mental haven of calm.

There’s a whole body of research showing the sleep-inducing properties of lavender aroma.

For example, as mentioned by the National Sleep Foundation, lavender has been associated with decreasing heart rate and blood pressure, which helps to put you in a more relaxed state, creating the right conditions for sleep.

Researchers examined the brain waves of 31 healthy young sleepers at night and found those who sniffed lavender before bed had much deeper sleep and felt more refreshed in the morning.

In an experiment involving young infants , lavender scented oils were proven to reduce crying and bring on deeper sleep after bathing.

Lavender is also considered a natural remedy for pain as it contains the molecule: polysaccharides.

As mentioned in the Journal of Phytotherapy Research, plants that contain these molecules are “the most potent in curing inflammatory diseases.”

If that wasn’t enough to convince you to have a cup, Fooyin University in Taiwan, explored the impact of lavender tea on postnatal women.

Eighty mothers took part in a trial and those who smelled the aroma of lavender tea and drank it daily for two weeks, reported less fatigue and depression, as well as greater bonding with their infants.

With the smells filtering out of the tea, it’s unsurprising that lavender is popular. Make sure you get some down you. you tonight!

The optimal time to enjoy a cup of lavender would be: early evening.

If you’re still thirsty for more after those eight teas, we’ve helpfully compiled: a list of other items, and things you can do, for a good night’s sleep.

Share
Previous Top 10 Gifts for People Who Travel: Healthy Gift Ideas
Next TENS Therapy for Pain Relief: Everything You Need to Know!

10 of the Most Zen Meditation Instagram Accounts and Influencers!