With so much going on in the world right now, it’s no surprise that the number of people living with anxiety is increasing.

In fact, the latest statistics show that over 40 million adults in the US are impacted by the condition, making it the most common mental illness in the country.

Also, for the first time ever, anxiety (63%) has leapfrogged being overweight (61%) as America’s top health concern, according to market research firm the Hartman Group.

There are a number of proven ways to help, such as journaling, yoga and meditation. However, have you considered the benefits of a cup of herbal tea?

We’ve done the taste testing and put together a list of the nine best teas, all backed up by science, to help ease your anxiety:

A favorite of many is the powerful but simple peppermint tea. It’s a widely consumed single-ingredient herbal tea, native to both Europe and Asia.

Wondering why it’s so popular?

Well, peppermint tea has a stack of health benefits. Research has shown that menthol in peppermint is actually a natural muscle relaxant, perfect for helping people living with anxiety to relax and unwind.

Peppermint can help with the associated feelings of depression.

A clinical study in 2015, focused on 70 heart attack patients. It looked at how essential oils could help those who were experiencing anxiety and depression following a heart attack.

Results were positive, showing reductions in both depression and anxiety scores. Outcomes suggested peppermint should be used as part of the rehabilitation of heart attack patients.

Additionally, women in the early stages of labor can benefit from peppermint tea. It has been shown to reduce anxiety and even help to relieve the pain of childbirth!

Sleep issues are a real problem in the US, with 35% of Americans not getting the recommended amount of sleep every night.

And statistics show that around 36% of insomniacs suffer from anxiety.

Chamomile is one of the best teas to help you sleep and has been shown to reduce anxiety and general depression.

A two-phase experiment at a large US academic medical center, found that long-term use of chamomile extract significantly reduced moderate-to-severe symptoms of generalized anxiety disorder (one of the most common anxiety disorders).

However, it’s important to note that it didn’t significantly cut the rate of relapse.

Lavender is a powerful herb that has been used for centuries for medicinal reasons, and is shown to decrease your blood pressure. It’s also another tea perfect for helping you get a good night’s sleep.

Amazingly, lavender is scientifically proven to be as effective as some medications when it comes to relieving anxiety.

In 2010, researchers discovered that Silexan (essentially an oral lavender capsule) was as effective as Lorazepam, a popular drug used to treat adults with anxiety disorders.

Another study conducted at Kagoshima University in Japan, discovered that lavender has the ability to reduce feelings of anxiety to encourage better sleep.

This was supported by the National Sleep Foundation, when they published their findings about scents that affect slumber.

Clearly your nose knows best so yourself a cup, inhale and unwind!

If you like herbal tea then chances are you’ve tried green tea at some point.

However next time there’s an ingredient you need to take note of — l-theanine.

Green tea is high in l-theanine, an amino acid that promotes relaxation and reduces anxiety.

It lowers the amount of stress-related hormones and neuron excitement in the brain, calming the body’s response to stress.

Green tea actually contains caffeine. Different types of green tea contain varying levels, so just be careful if you decide to enjoy a cup in the evening as you might find yourself wide awake at bedtime.

Thankfully you can get low-caffeine or decaffeinated green tea, that still has the same impact on anxiety.

In 2017, a study was carried out to analyze the anti-stress effect of low-caffeine green tea on 20 people. Participants were randomly assigned to either a low-caffeine or placebo tea group.

Over the course of ten days, the participants were monitored and it was revealed that stress levels were brought down in the low-caffeine group versus the placebo group. 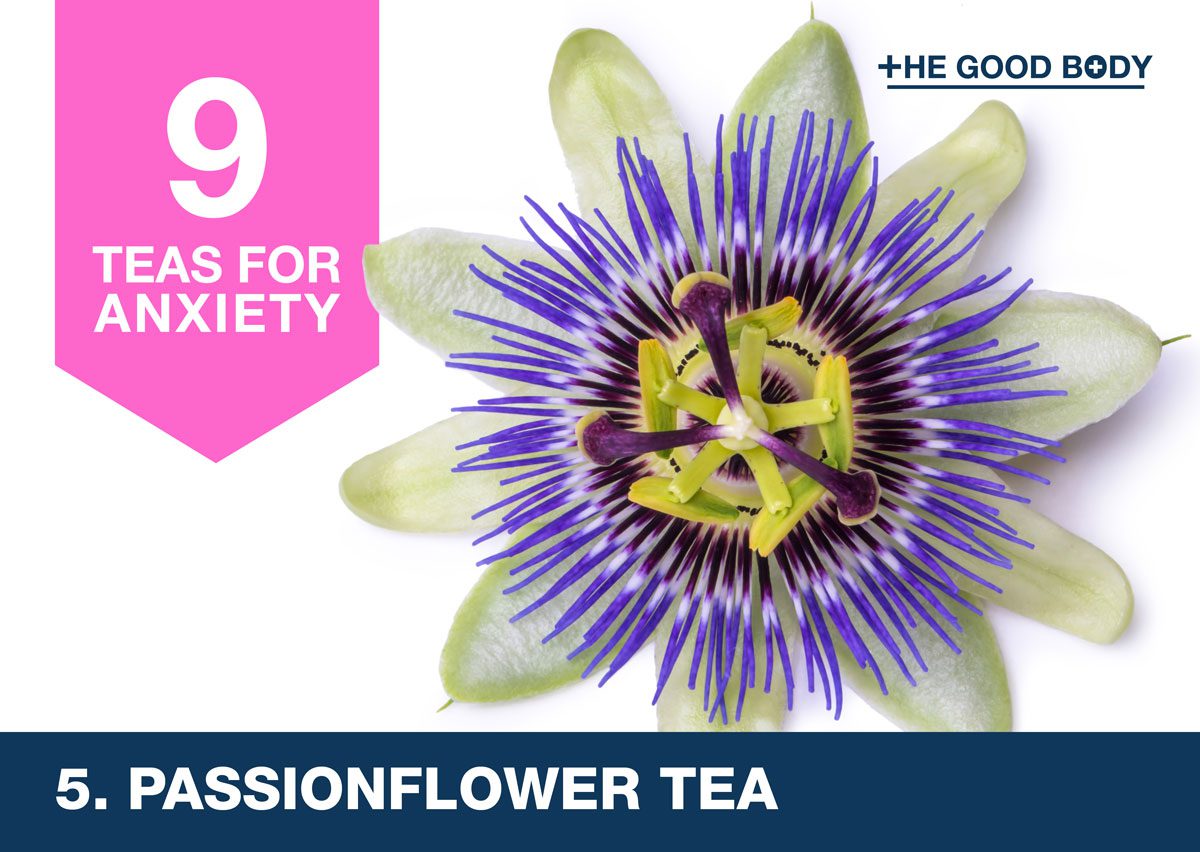 Passionflower has long been a folk remedy for treating a range of different conditions, including anxiety.

Numerous studies have shown how powerful passionflower can be for those struggling with the condition.

But, how does it help?

Well, passionflower has the ability to increase gamma-aminobutyric acid (GABA) in the brain. This is the naturally occurring amino acid that blocks impulses between nerve cells.

Researchers suspect that GABA has the power to make you feel happier and more relaxed.

There has been a ton of research to back up this finding.

A study involving 60 patients has been shared in the Anesthesia and Analgesia journal, and reveals passionflower can calm one’s mind 90 minutes before surgery.

During the project thirty patients were given oral Passiflora incarnata, with the other 30 given a placebo.

The anxiety scores were significantly lower among those who took passionflower orally.

That’s not all, in dental outpatient surgery it’s recommended as pre-medication to decrease anxiety without sedation.

Being concerned and on edge when it comes to visiting the dentist is a pretty common problem for many, even for simple procedures, let alone invasive surgery.

If you fall into this category you’re going to want to listen up now:

Research from 2016 analyzed the effects of passionflower on patients undergoing a tooth extraction versus midazolam — a medication which is frequently used before surgery.

Forty volunteers were recruited and split into two groups — some were given 260mg of passionflower and the others took midazolam.

Over 70% of the volunteers responded that they ‘felt quite’ or ‘a little anxious’ under both treatments.

However, with midazolam, 20% of participants reported amnesia, while passionflower showed little or no ability to interfere with memory formation.

Contrary to the name, this herb is actually from the mint family.

Lemon balm is used to treat a plethora of ailments — from anxiety, stress and insomnia to dementia and Alzheimer’s disease.

A word of caution — there isn’t compelling scientific evidence to support its use for dementia and Alzheimer’s disease.

However, when it comes to anxiety and stress, it’s a different story!

Lemon balm has been proven to work by boosting (the aforementioned) GABA, the neurotransmitter that soothes stress, just like passionflower.

In 2011 a pilot trial was carried out to test just how good it was when it comes to treating people with anxiety and sleep problems.

It was viewed as a beneficial treatment for the sleep disturbed and those suffering with mild-to-moderate anxiety disorders.

Ashwagandha is not as well-known as the others but that’s not to say it should be dismissed. Put it on your grocery list!

If you’re not in the know about this one, it’s an evergreen shrub that grows in exotic places including India, the Middle East, and some parts of Africa.

Many refer to ashwagandha as ‘Indian ginseng’ or even ‘winter cherry’. Its roots and orange-red fruit have been used for hundreds of years for medicinal purposes to treat many illnesses including arthritis, insomnia, diabetes and nervous breakdowns.

Over the years, there’s been a significant amount of research which has shown it’s great for tackling stress.

Participants were randomly divided into two groups — one group took a 300mg capsule of high-concentration extract from the root of the ashwagandha plant and another a placebo.

During days 15, 30 and 45 of this experiment, telephone calls were made to all subjects to check they were following the treatment and to note any adverse reactions.

The treatment group that was given the high-concentration full-spectrum ashwagandha root extract felt less stressed and reported a drop on the stress-assessment scale on day 60, unlike the placebo group.

A systematic review of studies (that involved 62 abstracts being screened and included 5 human trials) concluded that ashwagandha extract helped alleviate feelings of stress and anxiety.

You might want to treat yourself and start your day with this natural mood-enhancer.

The healing power of rose petals has been known for centuries, and today it’s used to make therapeutic essential oils as well as being enjoyed as a healthy and nutritious tea.

Rosehip is also known as, ‘rose tea’ or ‘rosebud’ and it’s made from either dehydrated or fresh rose petals.

It has soothing properties which has been scientifically proven to help cut down feelings of anxiety.

One study from 2016 explored the effect on people with end-stage kidney disease. They inhaled rose water aromatherapy for four weeks.

Results showed noticeable reductions in anxiety levels, and was seen as having a positive impact on the patient’s emotional and spiritual condition throughout such a difficult time.

Why not swap a bouquet of flowers for a box of rose tea, if you’re looking for a gift to help someone with anxiety?

The national drink of Fiji has been used for centuries as a medicinal plant due to its sedative and euphoric properties.

According to U.S. News it’s extremely popular in the US among people looking for an alternative to anti-anxiety medication.

Some people are referring to Kava kava (or just “kava” for short) as ‘the new CBD‘ (a chemical in the Cannabis sativa plant, known as marijuana or hemp, which is now used to treat pain, insomnia and anxiety).

There’s been a pilot study looking at the effects of kava. Twenty-four patients suffering from stress-induced insomnia were treated for six weeks with a daily dose of 120mg of kava.

It was found to reduce stress and insomnia for everyone that took it.

However, there was some skepticism as participants were told whether they had received kava or a placebo so, potentially, results could have been skewed.

That’s not to say kava’s sleep inducing qualities should be ignored.

In a clinical trial involving 61 participants over the course of four weeks, participants either received a daily dose of 200mg of kava or a placebo.

The people that received kava reported a depletion in anxiety levels and better sleep quality.

That’s not the only herbal tea out there to help you sleep. Be sure to check out our thoroughly researched list of the best herbal teas you can get your hands on for good quality slumber.

Share
Previous Discover The Best Foot Massager: Reviews (For 2022)
Next 20 Best Gifts for People Who Work from Home: Stay Healthy!

Discover the Best Massage Cushion (for Pain Relief) in 2022

Discover The Best Back Massager for Pain Relief in 2022

40 Back Pain Statistics (To Send a Shiver Down Your Spine)